In python, to get the instance of or type of or class of an object, there are two ways → accessing __class__attribute of the object and calling type(obj)function. Both returns the same value in new-style classes. Old-style classes before 3 have different result for those though

As shown in the code above type(x) will print <class '__main__.Foo'>because x is of type Foo or x is an object of class Foo. But the type(Foo) prints <class 'type'> which say the Foo is of type type. Foo is an object of type class. Not only the user-defined classes, but all the built-in classes will also have the same result which is <class 'type'>. And again as mentioned, all classes are instances/objects of type class, then type class should also be an object of a class which is type itself. In the short, the class of or parent class of typeclass is type itself. And this type is called a metaclass. How classes are created with metaclass type? Using the type function. The type function when passed a single argument, it returns the type of the argument. The same function can also be used to create a class dynamically as below.

The above code create a new class named Bar, inheriting from base class Foo

Let see what those argument are. The syntax is type(<name>, <base classes>, <attibutes>)

<name>: the name of the class to be created.

<base classes>: a tuple object of all classed to inherit from.

<attibutes>: a dictinary object of all the attribute to be added to the created class. 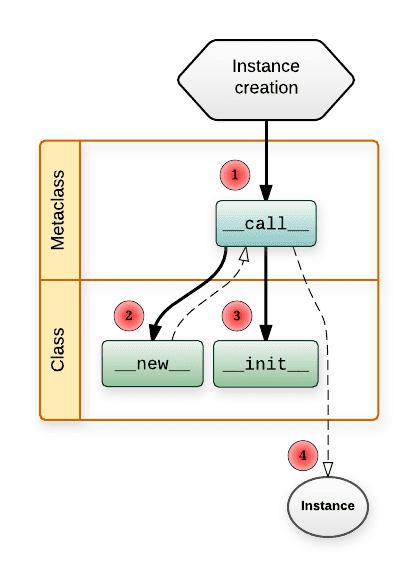 The diagram is more self explantory. The flow is

Not lets look at the creation of instance of metaclass which is creating a class itself. 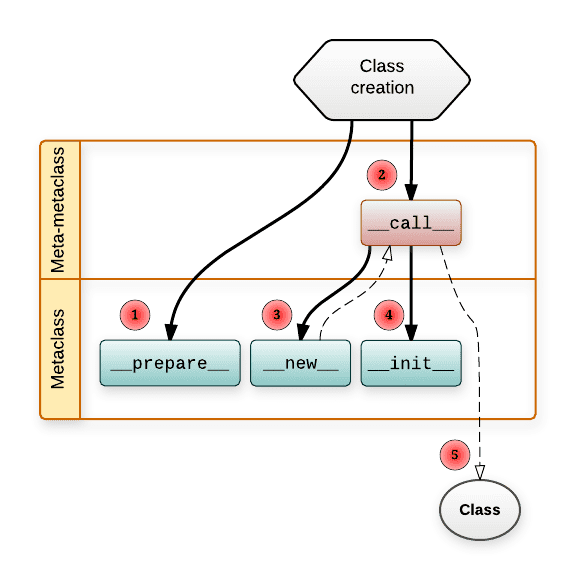